MV Agusta has a rich and lengthy race history as one of the winningest motorcycle marques of all time with the Varese firm having nabbed more than 75 world titles between ’52 and ’74. The company’s also had the honor of seeing a slew of motorcycling legends pass through its ranks and pilot its bikes with racers like Phil Read and Giacomo Agostini famously at the helm. So, it’s frankly unsurprising that when looking to build an MV Agusta-based cafe racer, that Switzerland’s Tricana Motorcycle’s would draw inspiration from the Italian brand’s illustrious race machines from around half-a-century-ago. 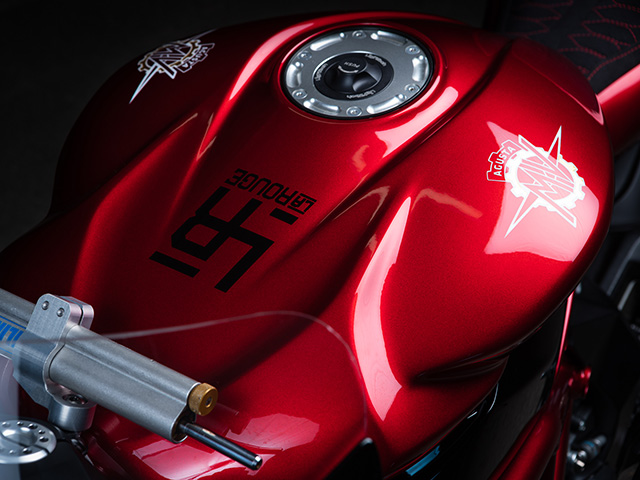 First founded in 2016, Tricana is a Swiss Italian motorcycle dealership that also has one serious knack for whipping up the occasional one-off project. Headed up by Jonathan Natario, the outfit’s latest bespoke creation is constructed around a 2013 example of MV’s full-faired F3 675 and has been dubbed “La Rouge”.

“The bike started life as a track day machine, so it hadn’t been babied, though it was still in solid shape with only 6,000km’s (3,730-miles) on the clock,” explains Jonathan. 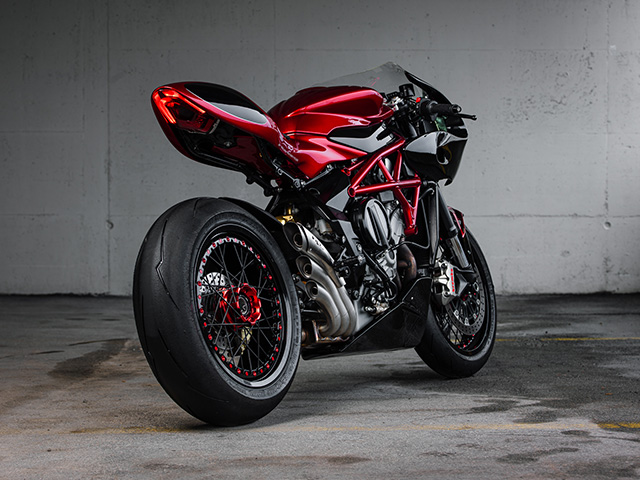 The project was commissioned by a client that had requested a cafe racer, so plans were drawn up for a pretty standard build with clip-ons, a round headlight, and a cafe-humped tail, though over time, Jonathan suggested to the customer that Tricana could do a bit more, and from there things morphed into the machine you now see before you. 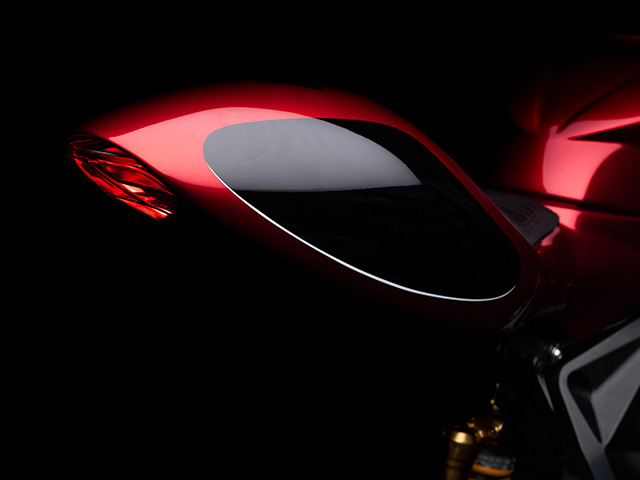 The F3’s stock fairing, tail, and subframe were all removed, and in their place new bespoke pieces have been drawn up, fabricated, and dropped into place. Out back, the tail retains the classic round profile of a humped cafe tail, while sporting a slightly more modern and streamlined overall aesthetic. Up from there’s a new ‘70s-inspired half-fairing that wraps around the forks before neatly coming to rest against the frame on either side of the bike. 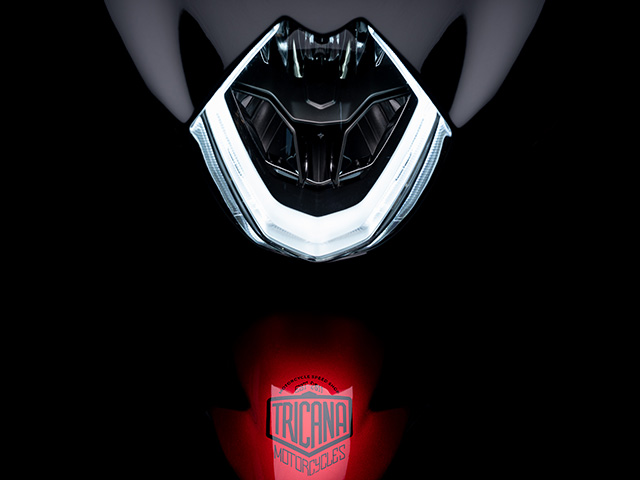 The notched-out angular tank the F3 left the factory with is still in play, though it’s been modified and shortened ever so slightly so it no longer sticks out past the rear subframe. Because the 2013 F3 doesn’t boast an underseat ABS unit, Tricana took full advantage of the arrangement to deliver a clutter-free, suspended tail section. 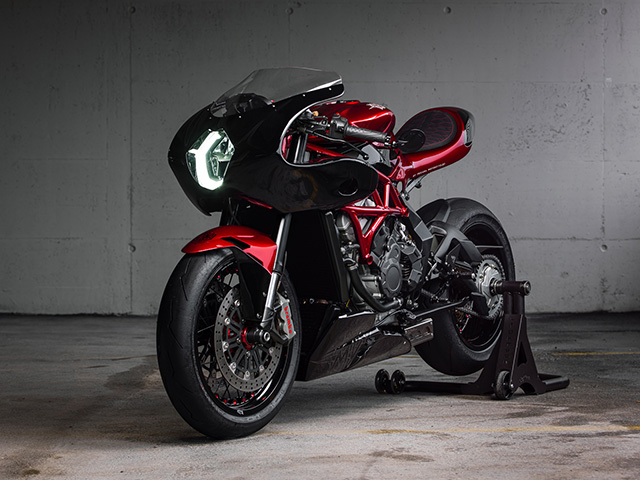 Slightly reminiscent of the fairing on the Ducati Sport Classic, La Rouge’s one-off fairing houses an LED headlight plucked from an MV Agusta Truism Veloce adventure model. Moving back, Jonathan has integrated the LED taillight from a 2016 Brutal 800 model into his custom tail section, resulting in an easy-to-see item that boasts a damn-near factory-level finish. The bottom of the bike’s silhouette is cleaned up considerably by a wedge-shaped custom fiber-glass belly-plan that encompasses the headers and rounds out the cafe’d F3’s profile. 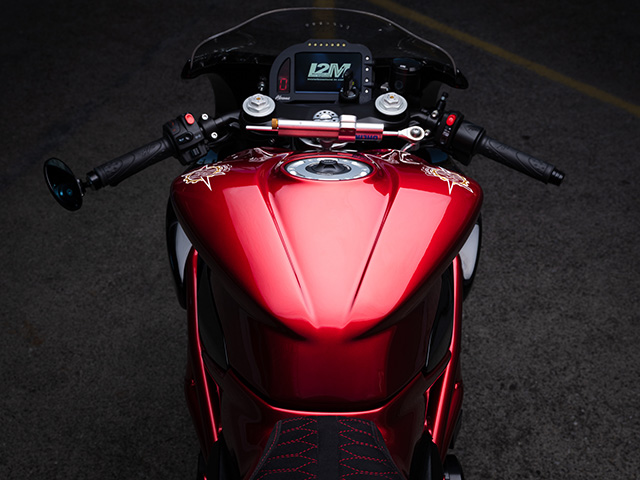 The RAM Air ducts have been removed from the equation, though Tricana has given the triple a set of MWR Racing filters. The gorgeous factory triple exhaust system’s been swapped out for an even tastier HP Corse HydroTre system — which mimics the original Tamburini-design tri-pipe arrangement — that’s been paired with a remapped ECU to accommodate the new respiratory bits. “I’ve also modified the shift sensor and added a slipper function so the bike can now do bi-directional quick-shifts,” explains Jonathan. 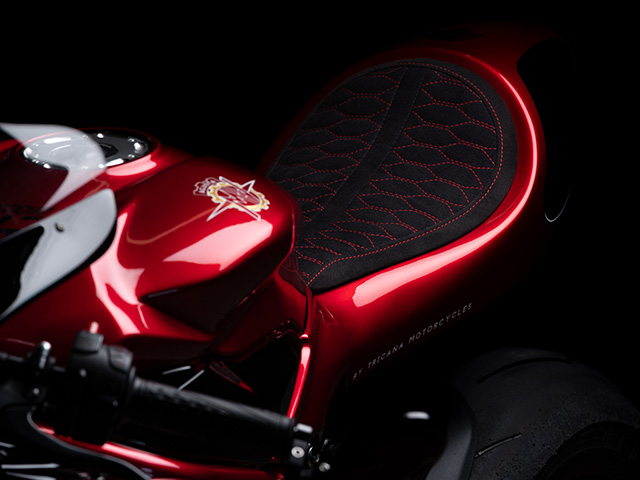 Jonathan took full advantage of Tricana’s access to MV Agusta parts while piecing together La Rogue, fitting the 675 with Brembo M4 calipers and lines from an F3 800, the aforementioned head and taillights, the windscreen from an F4, and top-shelf spoked Kineo rims off a 2016 Dragster RR. On top of all the trick MV hardware, La Rouge has also been bestowed with a generous array of billet bits from CNC Racing including the brake and clutch levers, transparent clutch cover, clutch pressure plate and red spring washers, and the wheel nuts. 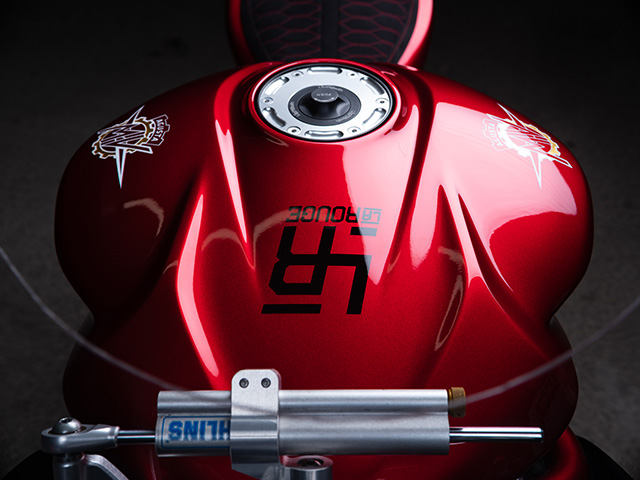 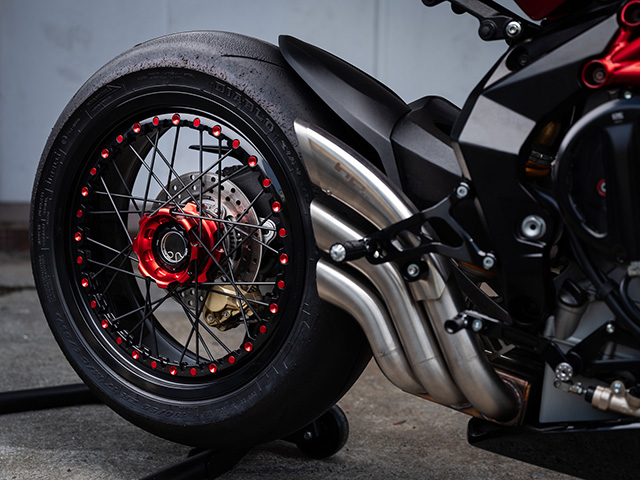 With everything else all sorted, Jonathan moved on to the paint. “Before disassembling the bike after I’d finished the bodywork, I took pictures and sent them off to Nuno from Capelos Garage who made me some beautiful renderings with different livery options. I ultimately ended up selecting the one I thought fit the build the best, which was a red and black scheme inspired by the MV Agusta Turismo Veloce Lusso from 2018. The paint job was laid down by Marty Designs, who we’d worked with in the past on previous projects” Jonathan tells us. 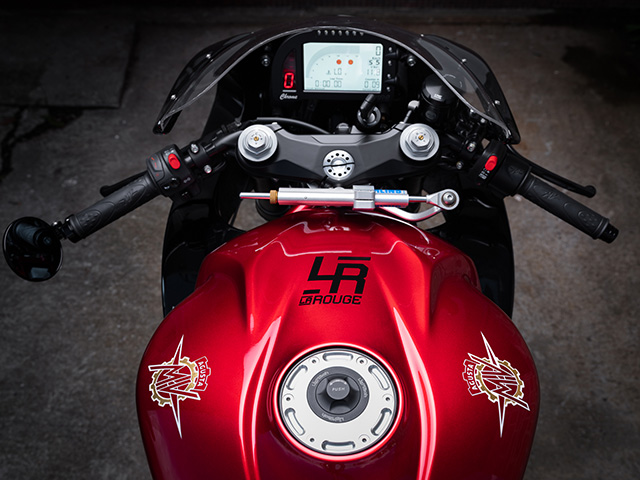 With an advanced trellis frame and potent Italian three-banger, the F3 675 is genuinely a stellar platform for customization, as so wonderfully evidenced by Jonathan and the rest of the Tricana team. The Swiss shop has also done a stellar job of delivering a blatantly-custom machine while still managing to retain much of the model’s aggressive and modern design language. With the recent launch of the new Superveloce, we’re guessing there’s gonna be a renewed interest in modern cafe’d MV’s, and if only even a fraction of them turn out as good as this one, that is a very, very good thing. 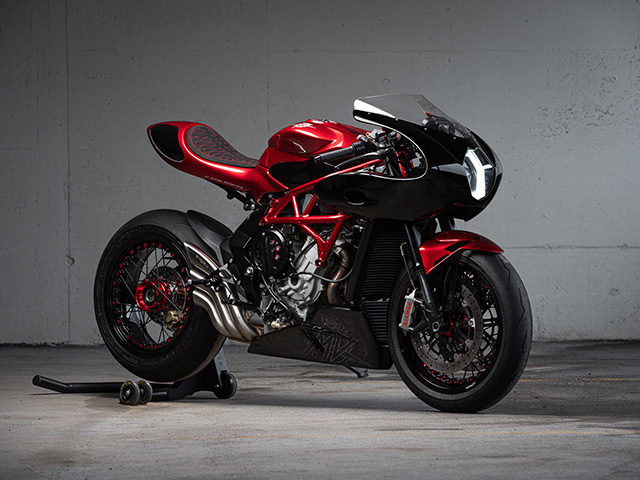