Dorkiness afflicts the ebike world like a global pandemic. The style scourge is so rampant, shoppers are easily swayed by gas scooters like the street-smart $2,749 Honda Ruckus over quieter, pedal-assisted EV-powered alternatives. Single-handedly defending the oddball ebike space is Super73, a Southern California-based outfit that began as a Kickstarter project under the Lithium Cycles nameplate, and now builds what some might argue is the only unembarrassing ebike in the field. 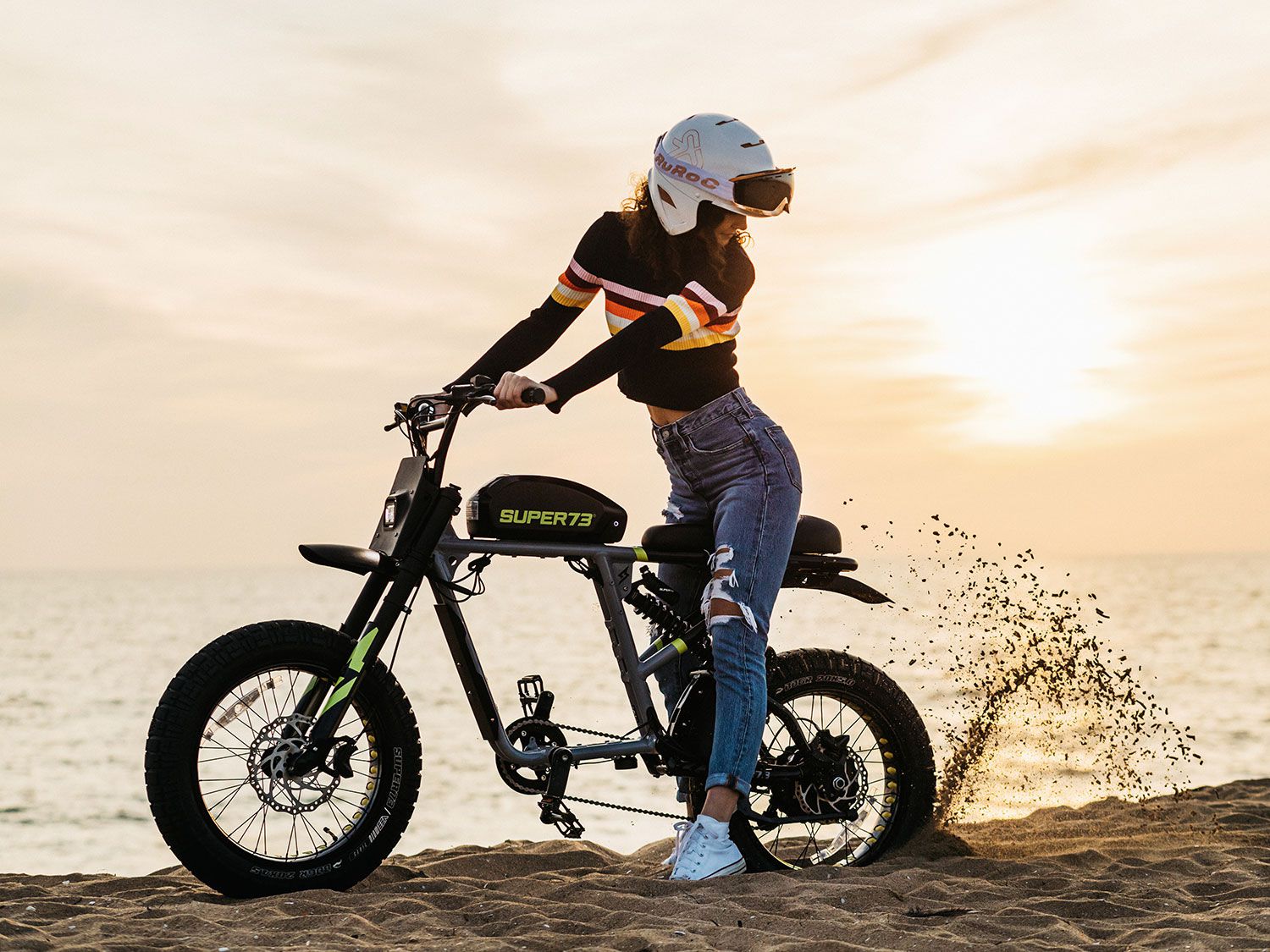 The firm has long stayed on the cool side, boasting associations with blokes like Post Malone and Will Smith while exercising its styling muscle with Taco minibike-inspired sleds and slick one-offs by customizers like Roland Sands. Its latest offering for the masses is the R-Series, a 960Wh battery-equipped bruiser claiming the largest capacity in the segment. For reference, a high-end ebike like the Specialized Turbo is motivated by a 460Wh battery; fully electric motorcycles like the Zero SR/F and Harley-Davidson LiveWire pack 14 kWh and 15.5 kWh power supplies, respectively. Although this aluminum-framed ebike claims 40-plus miles of range on throttle alone (or 75-plus miles with pedal assist), the entire bike in RX trim tips the scales at a mere 80 pounds—about the same weight as a tank and a half’s worth of fuel in a big-bore adventure bike. 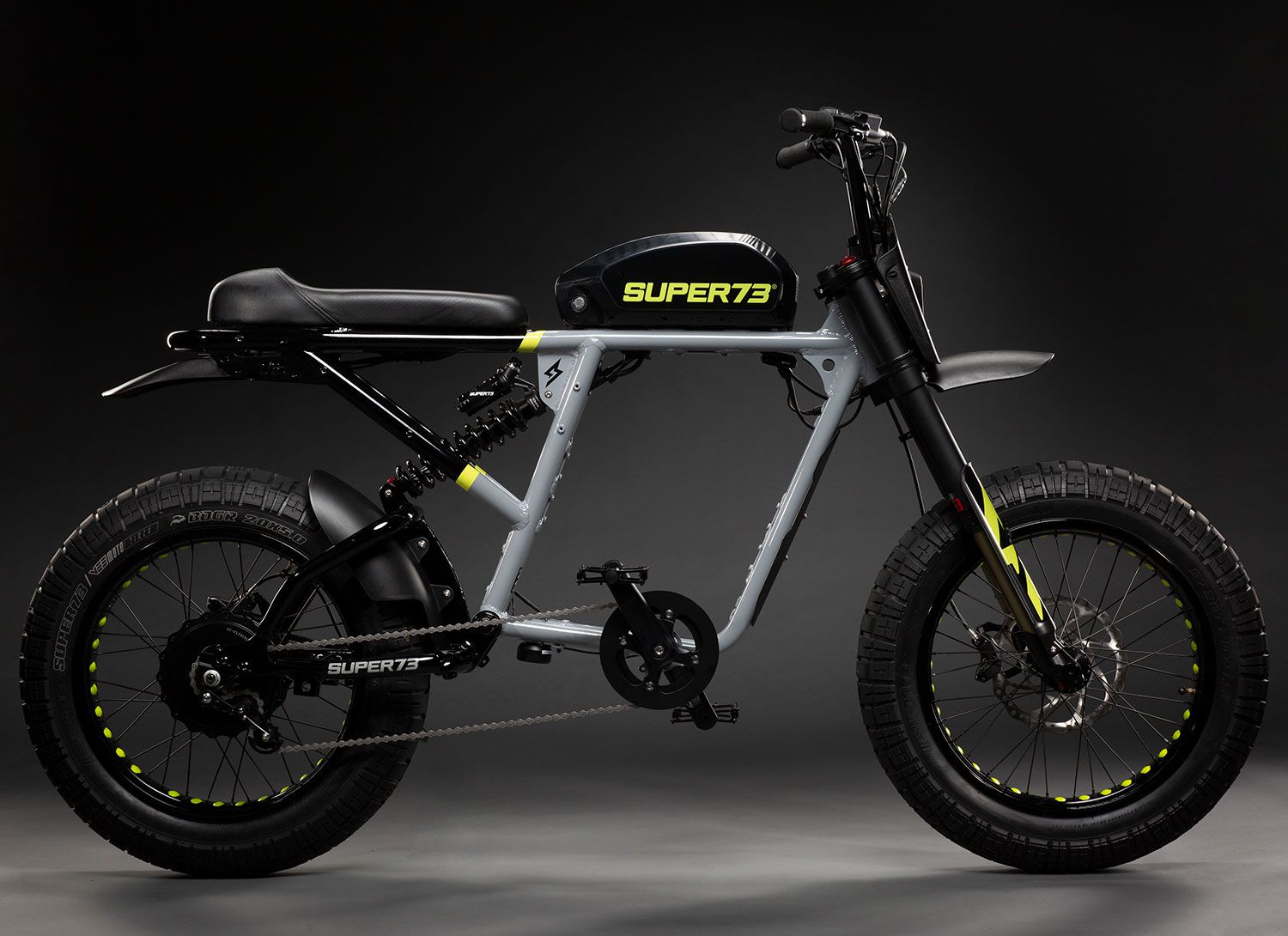 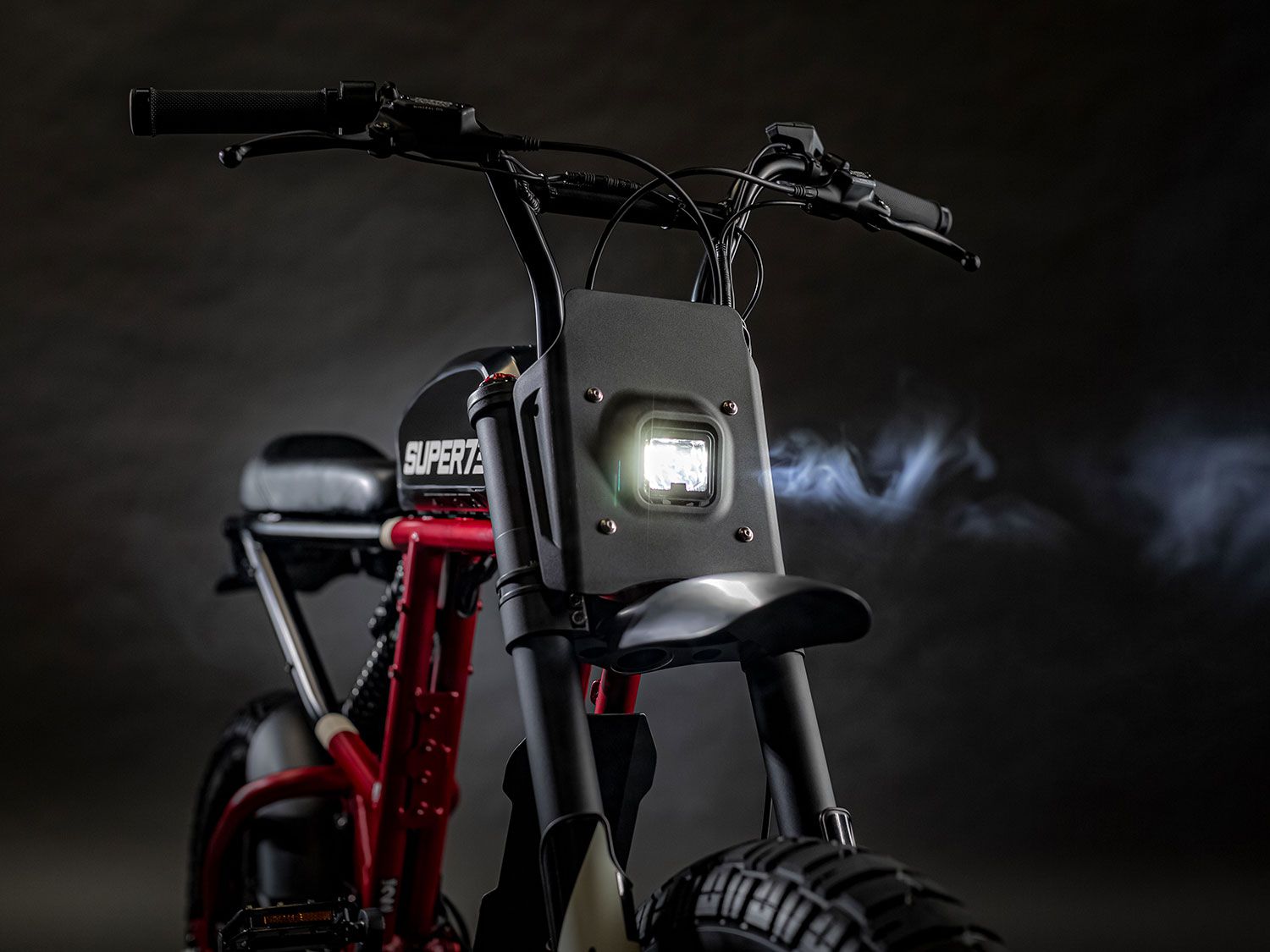 The RX model’s available headlamps and taillamps are LED. (Super73/)

The Super73 R-Series starts with a $3,000 starting price and escalates to $3,500 for the premium RX model, which adds air assist to the inverted coil spring fork, a rear piggyback reservoir to the rear monoshock, full LED lighting, a horn, fenders, premium paint, and four-piston brakes. Special pricing through February 28, 2020, shaves $500 off those MSRPs. 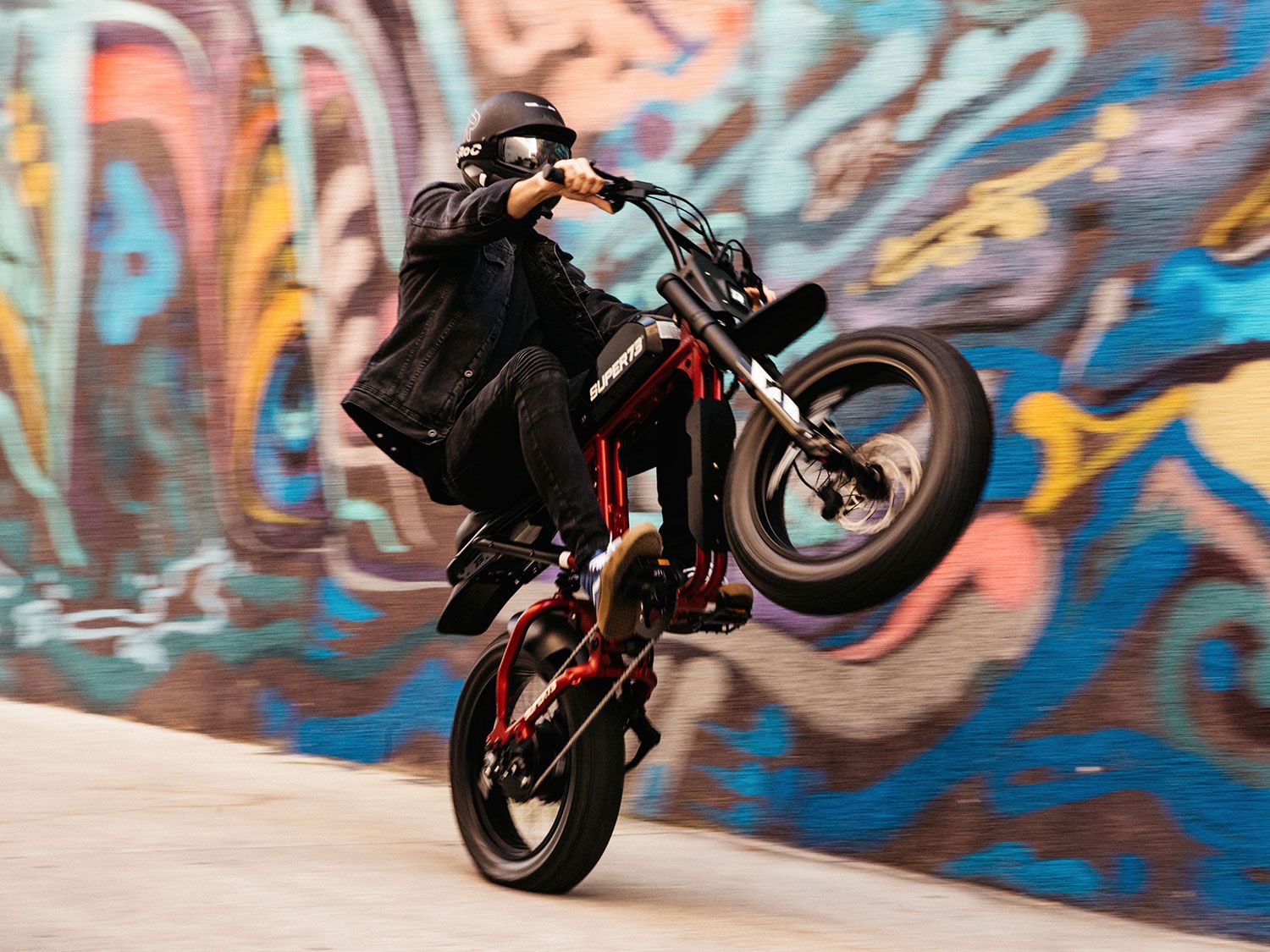 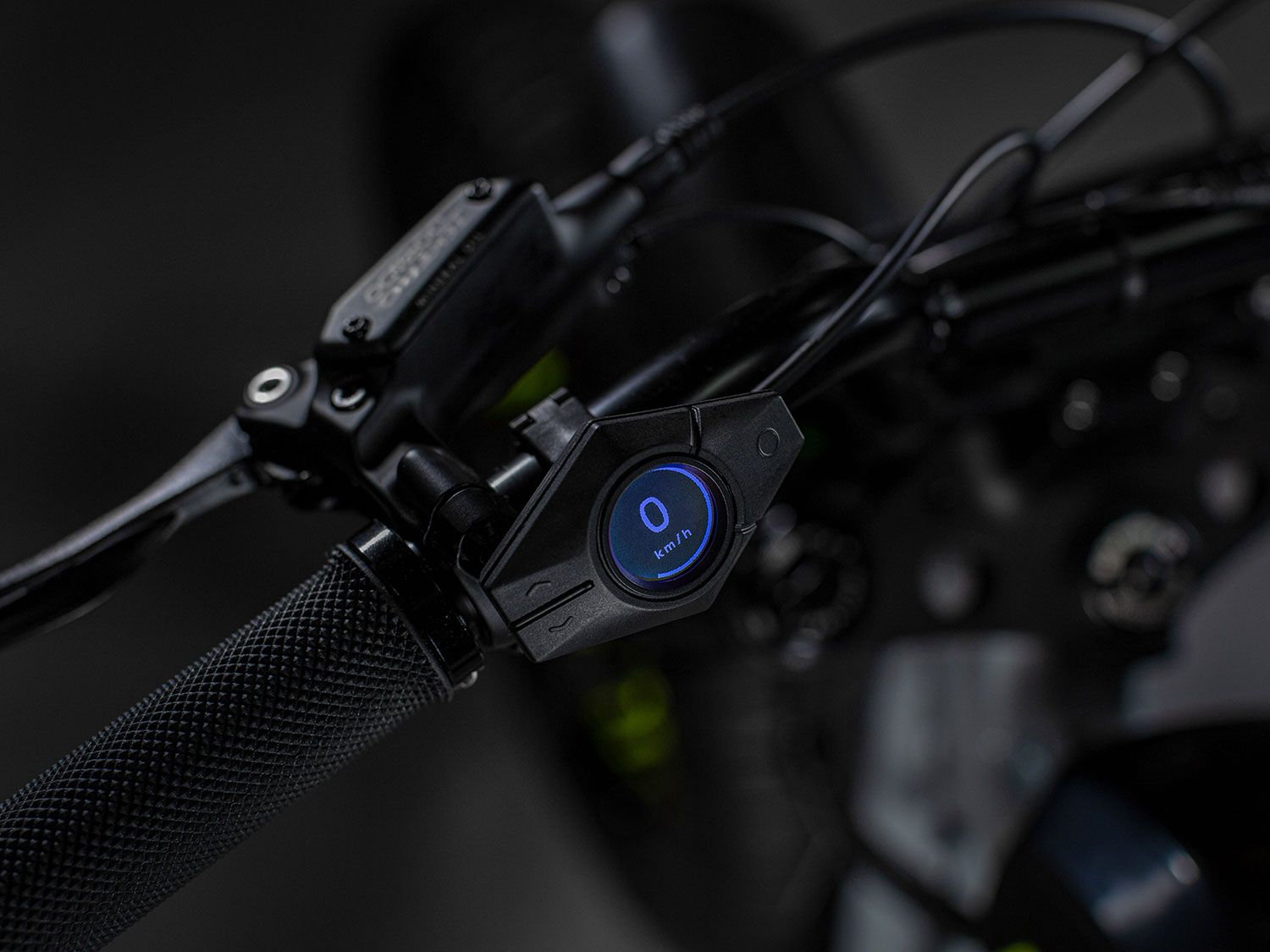 Quality hardware abounds in the new model, which is designed in California and assembled in Asia. The R-Series battery, for instance, is an energy-dense lithium-ion unit that uses the same Samsung 21700 cell construction as Tesla power packs. Sitting atop the frame like a minibike fuel tank, the power supply routes juice to a hub motor that can churn as much as 2,000 watts of peak power in Unlimited mode—roughly 10 times more power than a pedaling human. A full recharge requires five to six hours on a standard 110-volt outlet, or three to four hours with the optional 5-amp charger ($149). All Super73-R models ride on fat all-terrain tires wrapped around 20-inch wheels with lightening holes. An available LCD screen conveys turn-by-turn directions from your cellphone and offers bike setting controls and over-the-air software updates. 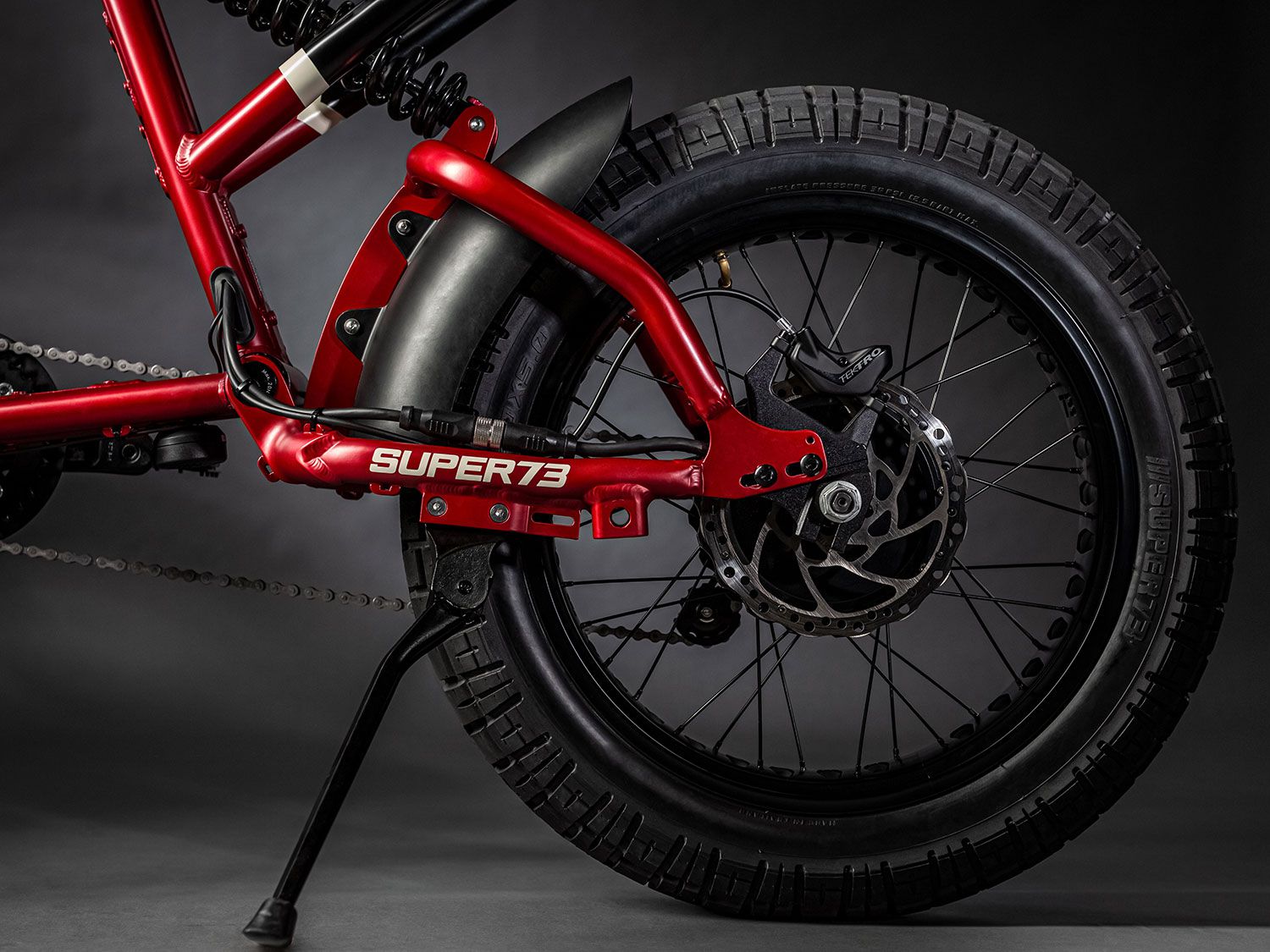 Rear brakes are 180mm two-piston units on the R, and four-piston stoppers on the RX. (Super73/)

However fun it may be to jam along at near-50cc scooter speeds, the off-road-only “unlimited” setting might be frowned upon on bike trails, where the Super73 is legally allowed to run in Class 1, 2, and 3 modes. Incidentally, 23 states so far have adopted the legislation that originally started in California and allows abiding ebikes to operate legally on bike trails without the need for registration or insurance. “I took it to 35 mph [in Unlimited mode] with my kid on my lap,” admits one of Super73’s co-founders, who adds that his wife nearly killed him when she learned of his homegrown R&D stunt. We like these people. 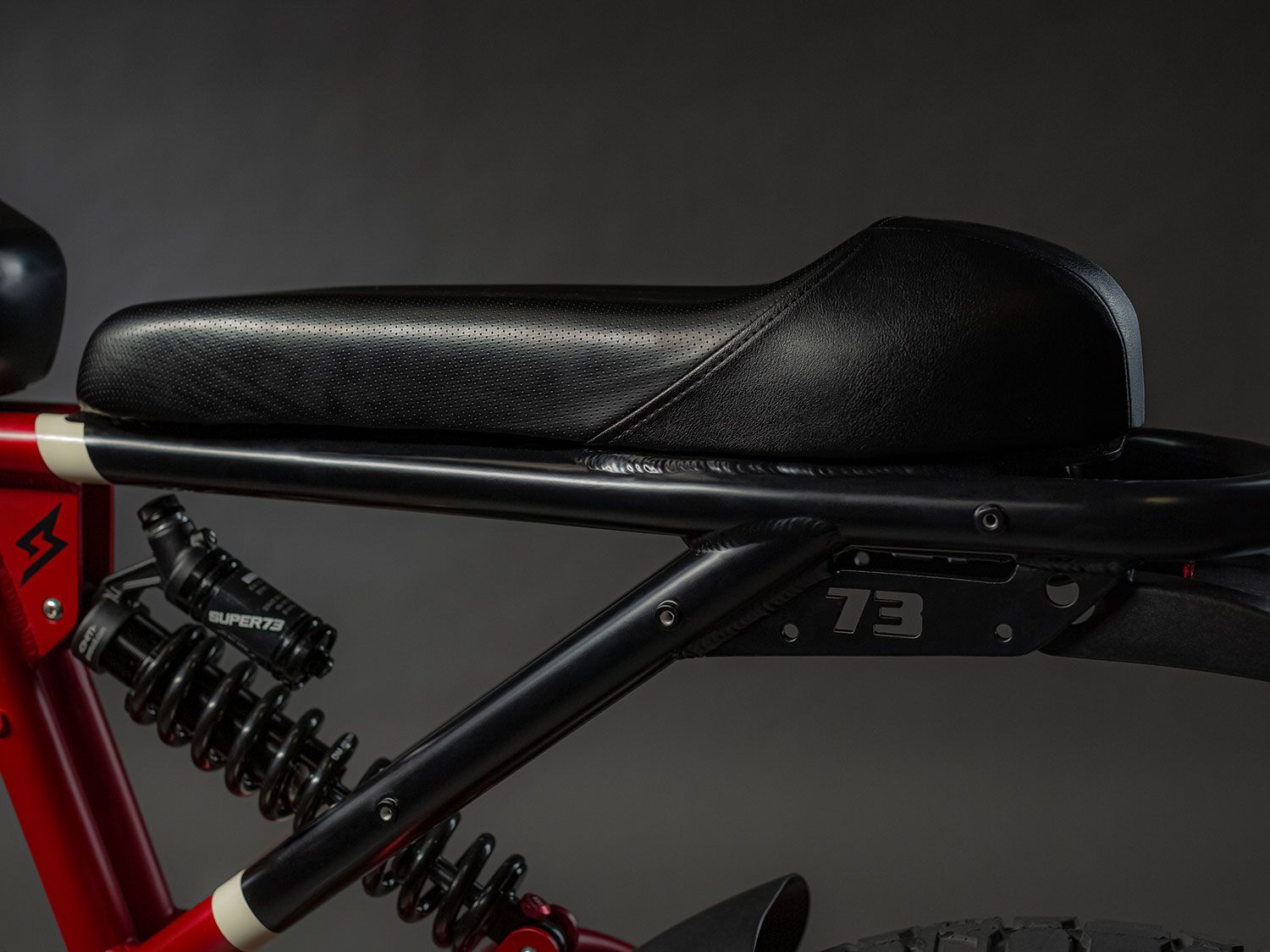 A test ride at the bike’s launch event reveals that while serious speeds can, indeed, be achieved using electric power, the proceedings move along much more swiftly when the rider puts a little bit of effort into pedaling. A 32-inch saddle is tall enough for most riders, and available two-up seating offers a seat for you and your favorite thrill-seeking pillion. The motor requires some work to overcome the initial inertia of accelerating from a standstill. But by pumping the pedals while squeezing the thumb throttle, the bike’s momentum escalates with a more urgent crescendo. An optional 10-speed gearset promises quicker acceleration; we’re not opposed to earning our speed by putting in a little leg effort. 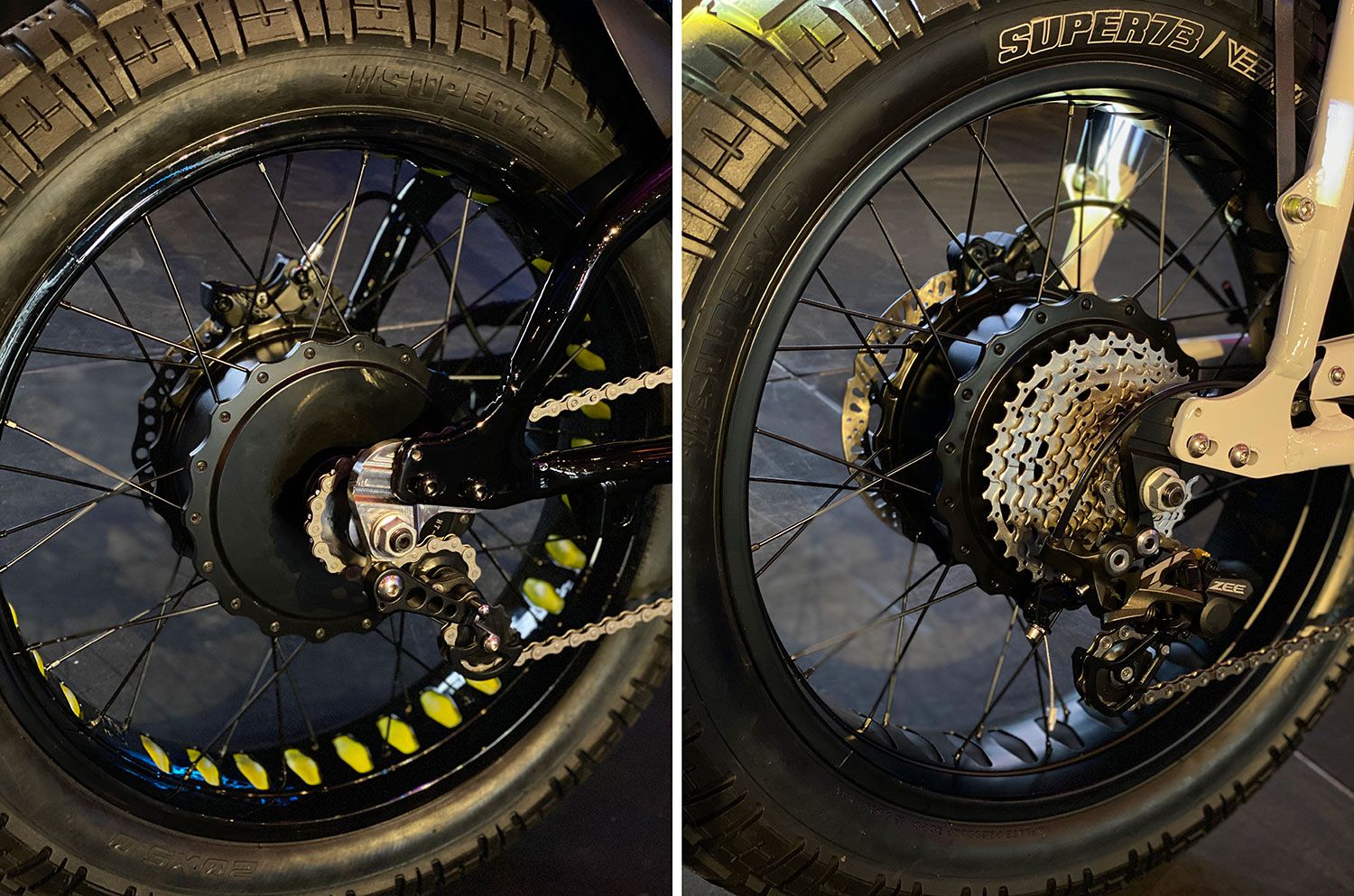 At least on the provided obstacle course, the chunky tires effectively soaked up blocky speed bumps. It’s fairly easy to lift the front wheel coming off a makeshift jump, and the front and rear hand-operated brake levers deliver sufficiently snappy stops. Given more space, we can imagine the Super73 makes for a steal-but-zippy commute weapon that just might burn a few calories along the way if you’re stopping and starting frequently. 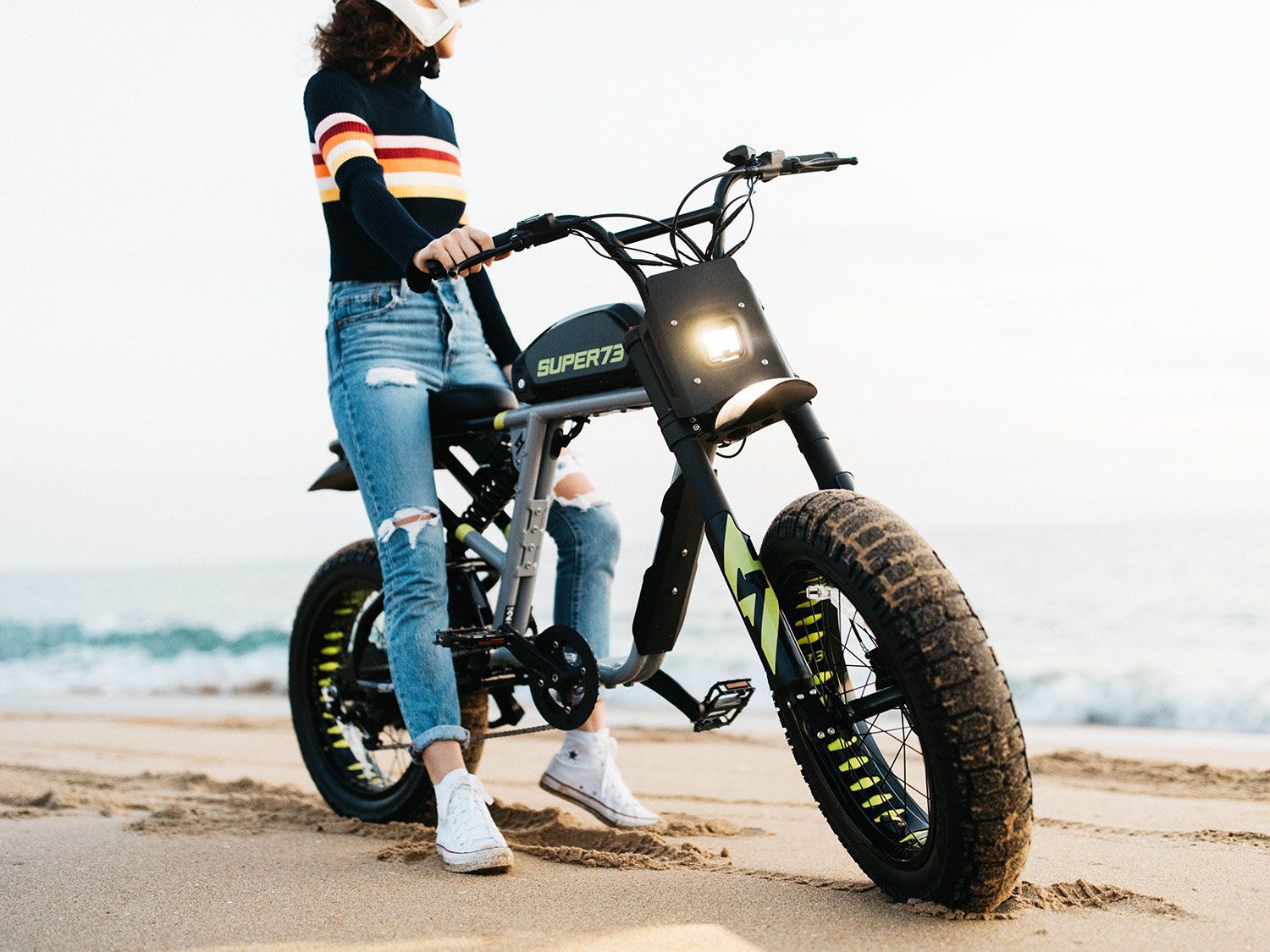 Coming soon to a neighborhood near you: Super73 riders occasionally traveling in packs. (Super73/)

Can an ebike take the place of basic two-wheeled transportation like the Honda Grom ($3,399), Honda Metropolitan ($2,499), or Yamaha Zuma 125 ($3,499)? It still takes a certain personality (aka, devil-may-care freedom) to rock a pedal-capable electric bike. But if you’re bursting with unbridled confidence and don’t mind contributing to the kinetic energy equation when you need more get-up-and-go, Super73’s new R and RX models remain the coolest rides in the ebike microverse. The author takes a spin at the bike’s intro in LA—your cool factor may vary. (Super73/)