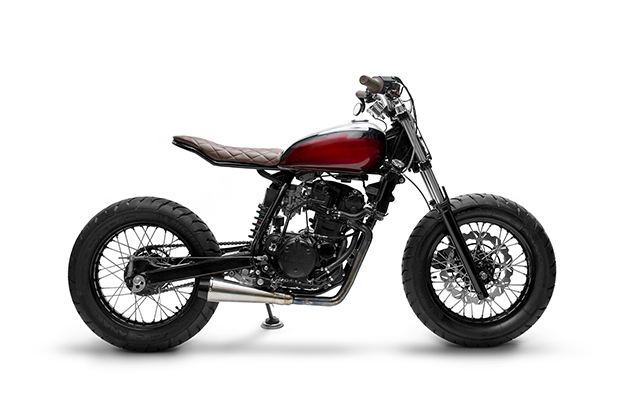 The days of the vast majority of the workforce clocking in at nine in the morning and heading home by five are all but over. The gig economy is here, shifts are scattered around the clock and job security can be a week by week proposition; no wonder people are stressed. So imagine what it’s like for a firefighter, solider and correctional officer, they need an extra avenue to unwind and what better way to do it than on a street scrambler ready to rip up the roads. Enter Canada’s Kevin Bergeron who builds just such beasts and the latest Berg & Co creation is this crafty Kawasaki KLR250. 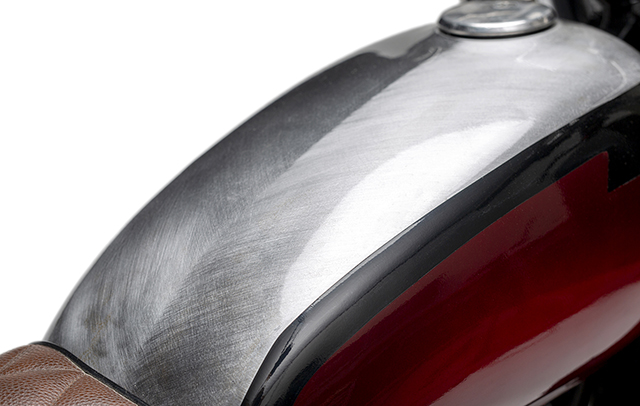 “I am a 26 year old firefighter/paramedic here in Alberta, Canada. My schedule consists of four days on four days off. Having four days off has allowed me to build a few custom bikes over the years and eventually open a small custom shop,” Kevin tell us. Having previously built high-end bikes of the pedaled variety, he turned his hand to custom bikes after inheriting his father’s tools. But before he tragically passed away the highly regarded heavy duty mechanic had also left his son a wealth of knowledge on all things petroleum powered. 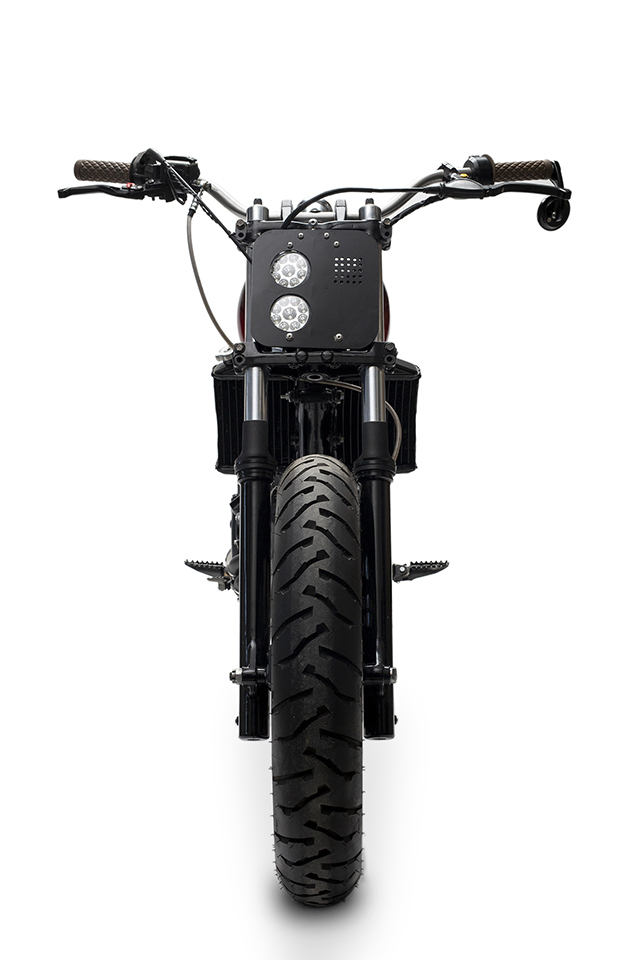 So with the days off up his sleeve, the knowledge of his own time at tech college and the tools of his father, Kevin kicked into gear and has produced a range of slick builds, one for a friend who works as a correctional officer. “This bike was built for a good friend of mine currently stuck in some desert overseas on military deployment.” So to ensure his great mate has a brilliant bike to come home to, the KLR has been given the full treatment! Pulled down and totally disassembled, the reliable little dual-sport once used by the US military, showed all the signs of a well worn machine. 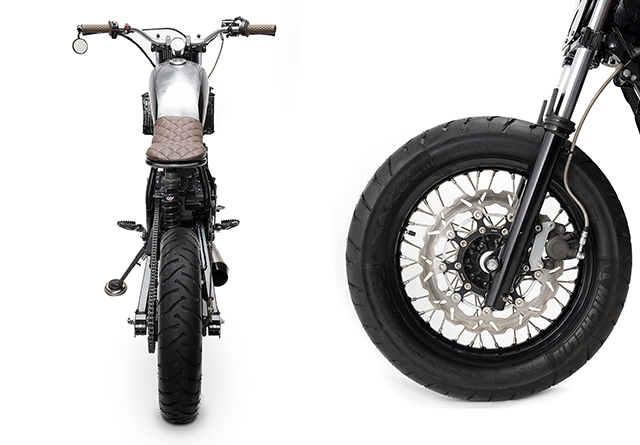 The 1984 engine was in desperate need of a refresh and Kevin has treated it to a full rebuild with the first step a rebore to 330cc and a new piston to match. Then the 4 valve, twin-cam single was built back up with all new gaskets and seals before getting a fresh coat of black paint. The custom exhaust perfectly mirrors the lines of the bike and not only looks a treat but sounds fantastic barking out of the reverse cone muffler. While the intake is improved with the carby drawing air via a Uni filter and a crankcase breather allowing excess pressure to escape. 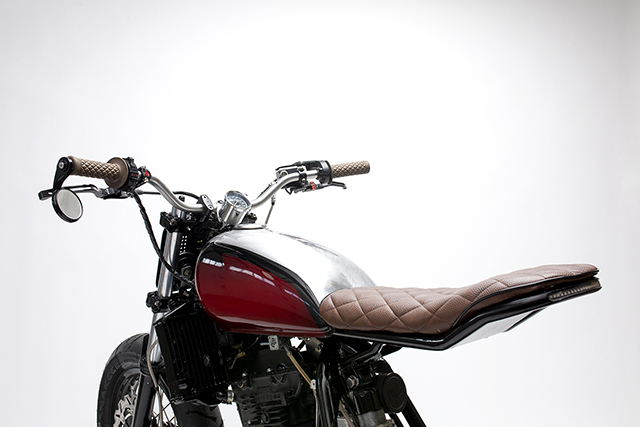 Now he had a solid runner to throw at the bike the frame needed a significant makeover to convert the bike from its factory purpose to the tarmac custom Kevin had in mind. The entire tail section was taken off with an all new subframe fabricated and welded into place and the backbone modified to accept a new tank. Beneath the now free floating rear end design, shock absorption is handled by a replacement unit from WP. While up front race tech kitted KLR650 forks are secured in place with a set of modified KLX triple clamps. 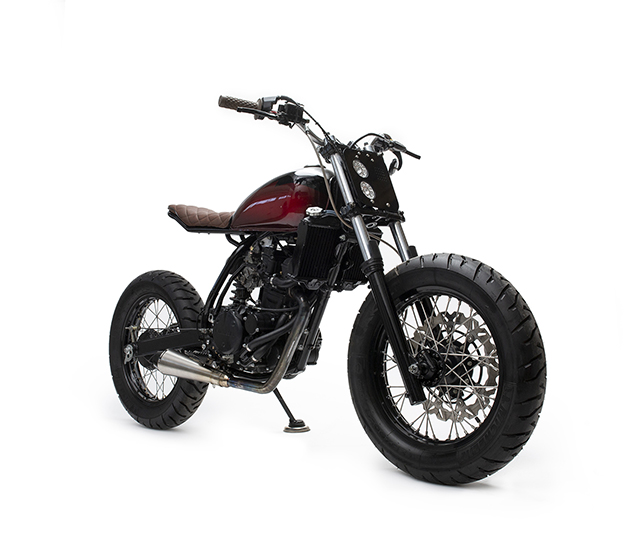 The front fork change allowed for a switch to a large 320mm wave pattern disc with the caliper positioned on a custom mount. Ensuring the braking was light years ahead of stock a new master cylinder and Brembo lever combo feeds the power to the new setup via a custom length stainless steel line. The wheels give the bike a supermoto feel and the combination starts with lightweight 17in Excel rims. These are laced up to the hubs with new spokes and nipples from the good folks at Buchanan’s Spoke and Rim. Before they were wrapped up in Michelin Anakee 3 tyres for good measure. 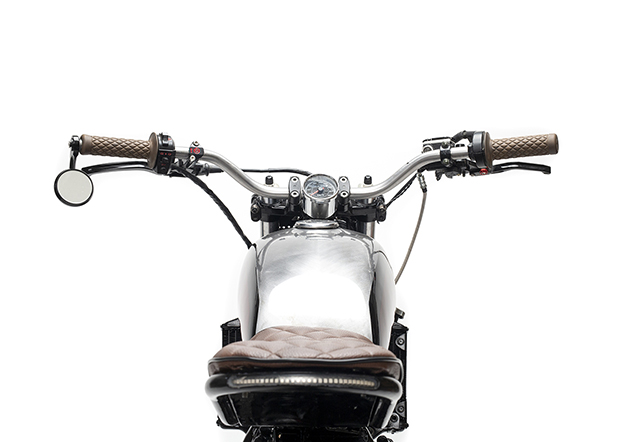 Now the all new roller needed a serious upgrade in the looks department and it starts with a change of gas tank, rocking a Suzuki GS400 item. This is secured at the front on Kevin’s own rubber mounts with the rear bolt hidden by the new seat. This is another of Kevin’s own creation’s with the seat hand formed by heating ABS plastic that runs the contours of the subframe with a neat up kick before being topped in foam and upholstered in house with diamond stitched brown vinyl to match the Biltwell grips. 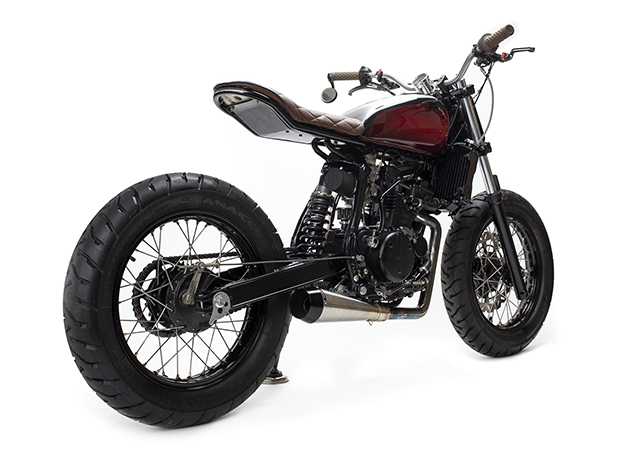 The paint job was also handled in house with the Suzuki tank being sanded in a directional pattern and then the sides painted using House of Kolor candy apple red bordered by a black detail stripe. Before everything was clear coated, including the bare metal top and the powder coat on the rest of the bike handled by Calgary Powder Coatings. A custom wiring harness completes the task with neat LED lights in the tail and number board front end. The Kawasaki debuted at the Kickstart show hosted by Ill-Fated Kustoms before the keys were thrown to the owner who had a well deserved few weeks break from active duty and now had the perfect excuse to let off some steam! 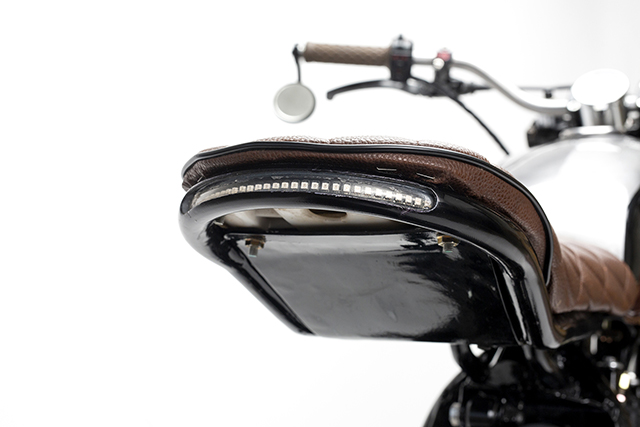 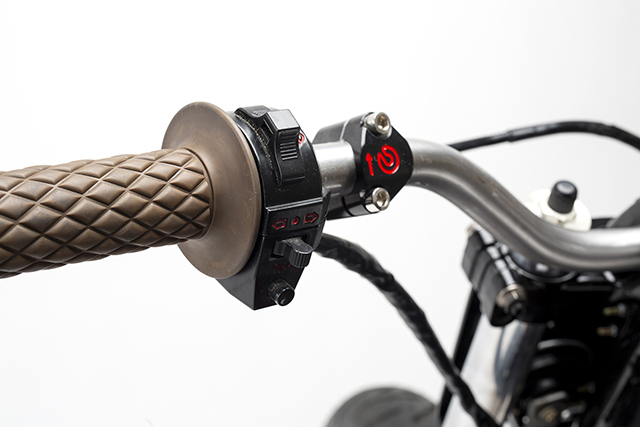 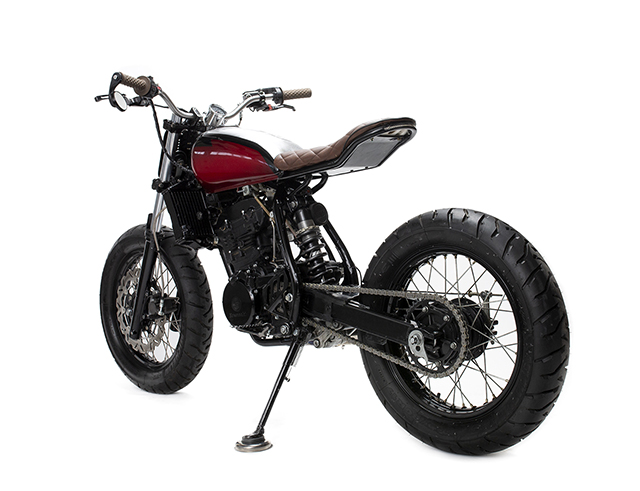